How this man turned a small coffee shop into a business empire employing 1,000 people 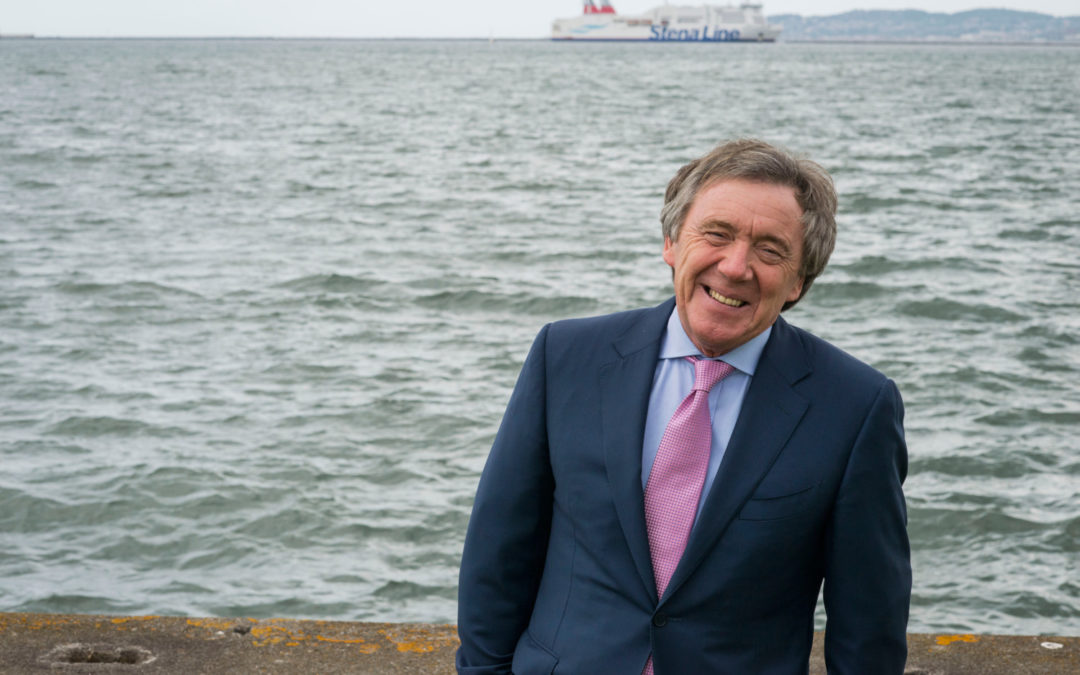 It all started with a pet calf named ‘Blackie’. She was given to Larry Murrin by his godfather when she was born. As a child, Larry became very attached to the black and white calf at home on the family’s 30ac farm in Summerhill, Co Meath.

His father Tom was a small builder and farmer, his mother Anne, of the well-known Ryan butchering and undertaker dynasty, had her own butcher shop in the Royal County.

The youngest of three was exposed to cattle, sheep and pig slaughtering from a very early stage. But reality hit hard when Blackie disappeared.

“The pet cow was a lesson of country life. I grew up considering the cow in the same way people would consider a small dog. One day when I was four, the cow wasn’t there anymore. The buzz in my head must have started then,” he says.

Sitting down with Farming Independent at Dawn Farms headquarters in Naas, Co Kildare, the CEO of the largest cooked meat ingredient producer anywhere in the world outside north America says his gentle, hard-working mother laid the foundation for his success.

“She just had enterprise and hard work in her blood and I do believe she passed that on to me.” In the mid 1960s, the Murrins moved to Fairview, Dublin, so his mother could start a new chapter in her business life.

“I was transplanted as a small kid to Philipsburgh Avenue and the Christian Brothers school in Marino. There were 1,000 kids in the school and I was one of a small handful of boys from the country,” recalls Larry.

Shortly after leaving school, he started working in construction. Then at 20, he saw an opportunity to open a small coffee shop near the former Gaiety Green – now St Stephen’s Green Shopping Centre.

“It was a very bohemian place thronged with people. I had a notion that a coffee shop snack bar would work well – there weren’t many at the time. I persuaded my sister Fran to come work with me in that business. She and I were really, really great pals and stayed working together for many years,” he said of his late sister.

That venture started him on a path into the food business. After a couple of years, they bought a second premises with a small prep kitchen which exposed him to the world of catering.

“That set me off selling prepared meats and deli items to the very early pub food business in Dublin, which led us into a slightly larger manufacturing operation, Windmill Lane.”

Dunnes Stores and Superquinn became two early customers of his cooked meats and his workforce expanded to 60 people.

“I often went to work in jeans and rubber boots and changed into a suit at lunchtime to go make sales calls or put on a white coat and go make deliveries to supermarkets. As a young guy in business, you think you know it all, but you don’t. I was really struggling to manage cash flow and profitability. I had all these great ideas about how to make products and get them to market, but I didn’t really appreciate the full nuts and bolts. That is where my mum, sisters Fran and Maree, and Nora – my then girlfriend, now wife – came in.

“There was many a Friday when I was scraping to make the wages. The women in my life, they did everything to help me get that business through.”

Although levels of sophisticated products in Irish supermarkets back then was very narrow, Larry felt food was going to mushroom.

“In the early 80s. people’s lifestyles were starting to change. Ireland was in the depths of a really ugly recession, unemployment was close on 20pc, interest rates between 14-16pc, our biggest export was people. But modernity was coming fast. The music scene was happening, tourism was starting to grow – you could sense a brighter future,” says Larry, a passionate reader who consumed Irish and American business magazines.

He became particularly fascinated by the potential of chilled pizzas – unheard of in Ireland at the time. He knew young people would buy into it.

“The pizza chains were only starting to grow, this was modern food that could be cooked in minutes. I followed a hunch, little did I know we would later become a very significant international player in the pizza toppings.”

During this period, he was fortunate to meet Waterford businessmen John and Peter Queally and Dan Browne of Dawn Meats. They invested in his vision. “They loved my mother, which helped. They could readily identify with that principal of hard work and graft. We struck up a very warm relationship and I couldn’t say enough positive about them. They have been fantastic investors, partners, shareholders, collaborators, innovators, supporters – they don’t get half enough credit for what they’ve done for the Irish food industry. They have been quietly instrumental in engaging and growing enterprises around the country that are thriving today,” he says.

With the Queallys on board, Windmill Lane became Dawn Farms, which officially launched at a small, custom made facility in Cherry Orchard in early 1985.

“We had the same customers, the same staff, we just started with a renewed focus. The new facility meant we could raise the bar in how we did things and the customers we went after.

“My mother and sisters came with us – by then, we already had a small embryonic catering business called Murrin Catering and that was to be the precursor to With Taste, also headed up by Fran. She developed the catering side while I went full time into the development of Dawn Farms,” he said.

“The Irish market wasn’t big enough. I researched Britain and Northern Ireland. I learned quickly that hundreds of companies in England were exactly like Dawn Farms, all small businesses cooking a little bit of this, a little bit of that and selling to the local retailers. There wasn’t a scale opportunity, the market was already saturated.”

Through his exposure to food trends, he realised the UK was streets ahead of Ireland.

“It had a larger population, multi ethnic, a big mix of convenience foods starting to come on the shelves. I had a small light bulb moment, I figured these companies bringing in new innovative, convenience food would need to buy ingredients to make the products so they could focus solely on assembling and branding, a lot like the automobile industry. I knew they would outsource to qualified expert manufactured specialists for all their culinary parts.”

He slowly changed the Dawn Farms model and introduced the ability to customise meat ingredients for these companies. “I knocked on doors and I got an audience. I didn’t get a sale but a dialogue started. In 1988 we got a real breakthrough when I had the neck to knock on Pizza Hut’s door to ask if they had any need for a cooked meat pizza topping. We got a hearing,” he said.

From these meetings came opportunities to produce small amounts of product for Pizza Hut, Findus and Ross Young’s food company. “It absolutely laid the foundation stones for the cooked meat ingredient business that we have today. It was fortunate timing, there were no specialised manufacturers then. Pizza Hut was a tipping-point moment, it was one of the big names of the industry putting an endorsement on this little company in Ireland. I didn’t shout it from the trees but it was a ring of instant credibility,” he said.

By 1991, the company expanded to a then greenfield site in Naas, which has expanded nine times over the last three decades.

“We had 60 people when we came here and we have more than 1,000 people on the site today,” said Larry, who also opened a third plant in Northampton in the UK in 2005.

Today, between 95-96pc of their output is exported to chains like Subway, Dominos, Papa Johns, Greencore, Taco Bell, KFC and many others in more than 40 countries in Europe, Africa, the Middle East and Asia. Dawn Farms are currently expanding sales into Ghana, Nigeria, Kenya and South Africa. “The goal is to break the half billion barrier in the next number of years and I have a great team who are committed to that target,” said the father-of-five, who is very proud of his own children who have fashioned their own careers in the agri-food industry.

He is not afraid of Brexit, however he believes the Government should take a stronger stand in defence of Ireland’s market share in the UK.

“The Irish agri-food sector bares no resemblance to when I started out 30 years ago.

“It is now a respected, forward-looking supplier of added value products with a strong consumer focus. Our success in Britain is natural, it’s our nearest market with 65 million consumers with similar food tastes.

“Britain itself is only 55pc self-sufficient in food, so it considers Ireland as a natural bread basket. Ireland cannot put a value on the reputation and the market share forged and won over many years in Britain.

“For me, we need to maintain competitiveness and protect our trade and our market share with Britain until we know the outcome of the talks. Our European competitors have access to long term (20 years) funding at low cost. We need to level the pitch and give companies access to such funding, not as a handout but on a commercial basis that represents a good investment for the country,” he said.

‘Origin Green could be the next Kerrygold’

Origin Green could be the next Kerrygold, Dawn Farms’ CEO Larry Murrin has said.

Seven years ago, at the invitation of Bord Bia, Larry and a group of fellow agri-food heavyweights and intellectuals from Harvard University, gathered to create a new brand for Ireland.

“We all asked ourselves the question – can we create the next Kerrygold? And could it apply to dozens of different food products in Ireland?”

“Kerrygold is the outstanding, wonderful success story that Ireland has had in dairy products right across the world in 60 years. You’ll find Kerrygold on market shelves all around the world. There is great pride in that and everybody wants to know how it can be recreated.

“We concluded that it might be impossible to replicate, but we did believe Ireland’s clean, green, fertile, fun agricultural image could have global appeal with today’s consumers,” he said.

“We put our money where our mouth was, it was a tough economic time, but we fundamentally believe it is the right aspiration for Ireland albeit that it’s going to take maybe 10 years to deliver the real benefits of the vision.

“At that point, Ireland will have an absolutely unique place in the world of food production,” he said.

Manage Cookies
To provide the best experiences, we use technologies like cookies to store and/or access device information. Consenting to these technologies will allow us to process data such as browsing behavior or unique IDs on this site. Not consenting or withdrawing consent, may adversely affect certain features and functions.
Manage options Manage services Manage vendors Read more about these purposes
View Preferences
{title} {title} {title}